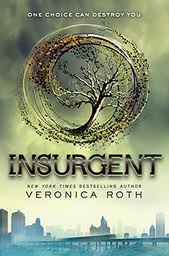 I don’t know about you guys, but I am SUPER excited to read the much anticipated sequel to the NYT Bestselling novel, DIVERGENT. In fact, because my 12 year old son is also excited to read INSURGENT, I’m buying two copies today so we don’t have to fight over them.

My very own teen panel, The Perfect 10 is also thrilled for this release day so I decided to ask Veronica Roth’s agent, Joanna Volpe if she’d be willing to answer a few questions from the Perfect 10 about how she discovered this gem in the slush pile of submissions and anything else they might want to know. Joanna just happens to share an office space with my very own agent, Suzie Townsend, so it makes me feel one degree closer to Veronica Roth than your average human.

Joanna represents all brands of fiction, from picture books to adult. She has an affinity for stories that have a darker, grittier element to them, whether they be horror, drama or comedy. Her recent publications include The Shadow Reader by Sandy Williams (Ace), Divergent by Veronica Roth (Katherine Tegen Books), Shut Out by Kody Keplinger (Poppy), and Torn by Erica O’Rourke (KTeen).

INTERVIEW WITH JOANNA VOLPE AND THE PERFECT 10

BRANDON: What do you take into account when you choose new authors/clients? —

JOANNA: When I sign a new client, I take into account Three Main Things:
1. Do I love, love, LOVE this story?

2. Do I love the author’s writing in general, beyond the story?  Just because I think something can be a book doesn’t  mean I can guarantee it will sell. But if I really admire the author’s writing, I know we’ll sell something eventually, whether it’s their first, second, or even third project.
3. I always have a phone conversation with a client before offering, so the last thing I take into account is whether or not I feel like I can work closely with this person. I ask a lot of questions when we talk, and I encourage them to ask me, too. Working on a story is a very personal and intimate process. It’s extremely important that we share the same career goals and editorial vision.
NATASHA: What drew you to DIVERGENT?

JOANNA: I had read a previous project of Veronica’s, so I already knew she was a great writer. So when I started reading Divergent, I was into it pretty much from page one. BUT I know the exact point when I really hooked–the point of No Return. For me, it was the first time Beatrice jumped onto a moving train. Right after the Choosing Ceremony, when all of the new Dauntless initiates jump on…there was one boy who didn’t. Beatrice looks behind her and sees him standing there and very matter-of-factly remarks that he’s now factionless. The fact that it was that easy to become an outcast of society terrified me…but it also raised the stakes! I didn’t sleep much after that….

SAMMY: The name for the last book? Could it be Detergent?

JOANNA: It’s Top Secret! Could it be Detergent? Maybe…there is an awful lot of laundry piling up in these books, no?
SAMMY: How is Insurgent compared to Divergent? Better? Worse?
JOANNA: It’s hard to compare! They both affect me so differently. I do think that Veronica’s writing has gotten better and better (and it was amazing to start!).
SAMMY: Do Marcus and Peter get some karma coming their way? Bad karma preferably.

JOANNA: Marcus and Peter both play important roles in Insurgent. That’s all I can say about that.

SAMMY: Is there more explaining of what Divergence really is?

JOANNA: Yes. But also, we get to learn more about what it MEANS to be Divergent.

ZAREEN: Who is your favorite character from Divergent?

JOANNA: I love Tris’ mom. She’s such a brilliantly subtle character. I also love Christina. That could be because of my Candor roots (I am totally Candor all the way). Christina’s funny, too.  I like a character with a good sense of humor.

ZAREEN: What was your first impression of Divergent? Did you believe from the start that it would become a bestseller?

JOANNA: I knew from the start that this book was going to be something special. When I went on submission, I told the editors to read it fast. I don’t normally do that, but I just had a feeling….

ZAREEN: Also, if possible for you to answer this just as a yes/no question, can you tell us if there are any character deaths in Insurgent?

Thanks Joanna for a great interview! I’m off to read INSURGENT now and hopefully chat about it with some of the awesome Perfect 10 squad via twitter.

How about you? Are you reading this series yet? If not, have you been locked in a basement for the past year? And what Faction would everyone choose…I have so much trouble with this question. I just can’t decide. Perhaps I’m Divergent….