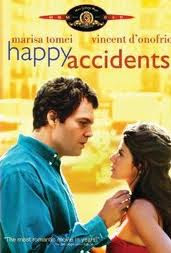 Time Travel Tuesday is a new thing I’m doing and it’s exactly what it is. I’m time traveling every Tuesday.

Anyway, Time Tuesday Travel is where I talk about a time travel related book, film, or TV show that I’ve recently watched for the first time ever or some other bit of information related to the subject matter. People always ask me what time travel stories inspired Tempest and the answer is almost always none…if you’ve read Tempest, you’ll know why. It’s pretty non-traditional time travel, but since giving my presentation on time travel at LeakyCon last month, I’ve become enthralled with the idea of being a writer of a time travel story and sitting down to watch someone elses’ time jumping creation…something new that I haven’t ever seen before. It’s weird and kind of cool, actually.

Until you actually attempt to write time travel, you can’t even imagine all the things that you have to think of to be able to make the story believable. It’s very different to look at it from the writer’s perspective. So that’s what I’m going to do here. I’m going to give you my reader/viewer opinoin and then the “Inside the Writer’s Brain” opinoin.

Summary:  Ruby Weaver has man trouble: she tries to fix them, so she’s stuck herself with a string of losers. Her current lover, Sam Deed, seems different: he’s sweet, tender, just in from Dubuque. But, as Ruby tells her therapist about Sam, in flashbacks we see someone not quite of this world. In fact, Sam informs Ruby that he’s from the future, 2470 to be exact, traveling back in time to avoid prosecution for his sister’s death, and to find Ruby, whose photo he saw back home. Ruby’s sure he’s delusional, but most of the time she wants to keep him – and maybe fix him. Although he seems sane, maybe Sam hasn’t told her the real story: what’s he up to, and who is Chrystie Delancey?

So…Happy Accidents is a movie I stumbled upon while bored and searching basically everything on Netflix. It’s currently available on instant queue.

I was a little nervous at first since it’s an independent film and those tend to be either awesome or…well…not awesome. The movie started out a little corny but nothing I couldn’t tolerate. Then I began to wonder if it was really in this guy’s head and he couldn’t actually time travel, he just was a little crazy and I kinda thought that concept was intriguing. Then he started explaining the future and she explained his explanations for everything to her friend that she consults on all her dating ventures (she’s had a lot). I had so much fun with the sci-fi part of this movie because it was subtle and mostly had a contemporary feel. In the end, I really loved it and you don’t have to be a time travel or sci-fi fan to enjoy this. Romantic Comedy lovers welcome.

INSIDE THE WRITER BRAIN

I’d say the writer(s) here kept things fairly simple. They had all the basics…a WHO character (someone doing the actual time traveling), a seamless HOW explanation (he’s from the future and they can time travel in the future because things are more advanced in 2470–I believe that 100%), and most importantly, LIMITATIONS (time travel has been invented and then made illegal so he can’t do it too much and then he has these spells and headaches from the effects of “back travel”…it’s like serious jet lag) without limitations time travel stories will have virtually no plot.

Has anyone else seen Happy Accidents? What else do I need to be reading/watching?

Next Tuesday, I tackle Dr. Who! Yeah, I know…why haven’t I been watching it already?! Better late than never, right?