When Travis returns home from a stint in Afghanistan, his parents are splitting up, his brother’s stolen his girlfriend and his car, and he’s haunted by nightmares of his best friend’s death. It’s not until Travis runs into Harper, a girl he’s had a rocky relationship with since middle school, that life actually starts looking up. And as he and Harper see more of each other, he begins to pick his way through the minefield of family problems and post-traumatic stress to the possibility of a life that might resemble normal again. Travis’s dry sense of humor, and incredible sense of honor, make him an irresistible and eminently lovable hero.

Something Like Normal by Trish Doller was released yesterday, June 19, from Bloomsbury USA Childrens.

“An “affecting” look at one teen soldier’s experience on leave from Afghanistan and says readers will be invested in Travis’ “poor, shattered soul.”
-Kirkus Reviews
“A compelling look at at the aftermath of a tour of duty in a war zone.”
-VOYA
“Amazing. You will smile and sob and when you finish, you will walk away a better you. READ THIS BOOK NOW.”
– Lauren Myracle, New York Times Bestselling author of SHINE
“Unflinching, but relatable, Trish Doller’s SOMETHING LIKE NORMAL is everything I love in a contemporary novel–fresh characters, hard edges, and a tender love story to balance it all out.”
– Suzanne Young, author of A NEED SO BEAUTIFUL and A WANT SO WICKED

Here is what Perfect 10 member Hannah, thought of the book: 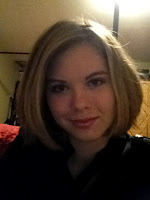 I really liked how real Travis was. Like he wasn’t some perfect guy he had flaws before going into the marines and he still had them afterwards. Also I really liked Harper’s character. She just seemed like such a cool person! Trish told us a little bit about her past but I wish there was more on Harper in the book. As a teen I felt like I could relate to the subject matter of coming back from war at his age because I know that there are some people who do enlist at his age. Like my cousin enlisted in the army when he was around Travis’s age even though it was for different reasons.

Now we have an interview with Trish Doller herself with some questions Hannah had for her:

In 2003 I was writing for my hometown newspaper when I was asked to interview a Marine home on leave after serving in Iraq. As I talked to him, I could not stop thinking about how young he was, and how he’d seen and done more than his high school friends would ever experience. His story stuck with me all these years.

What techniques did you use to make Travis so believable?

I talked to a lot of Marines. Some told me about their experiences in Iraq and Afghanistan. Some told me how different and out of place they felt coming home–even just after boot camp. And as for the “maleness” of the characters…well, I have a son a bit older than Travis. I’ve paid attention to how he and his friends interact with each other.

Can you relate to any of the characters in your book?

There’s no one to whom I strongly relate, but I’d probably have to say Travis’ mother. My son never enlisted, but when he moved out to live his own life and start a career, I worried about him. There’s a weird loss of control you feel–like your child is now at fate’s mercy and you can’t protect him. It can be a little scary, even if you son or daughter isn’t putting his or her life on the line.

How do you feel, officially being a published author now?

It is a little surreal, because I still have to get up and go do my day job like everyone else in the world, but it’s kind of like I’m carrying around this real cool secret. I don’t even know if that makes sense, but It feels great. And nerve-wracking at the same time because now I’m hoping to build a career, so I can’t dwell too long.

If your career as a writer had failed what would you doing right now?

Thank you Trish for answering our questions and happy release day to you and Something Like Normal!