THE STORY BEHIND THE STORY

Right after Tempest released in January 2012, I was on a flight home from NYC feeling overwhelmed already with release day buzz and everything that went along with that. I sank into my seat on the plane and needed to put my mind elsewhere and of course it drifted into a new story. One that took me back to my roots not only as a Gymnastics Program Director at the YMCA, but also my time coaching kids for an elite developmental program called TOPs (stands for Talent Opportunity Program). Training young girls for TOPs testing gave me an inside look at the world of elite gymnastics and what it takes to be that great and how few individuals ever reach that level.

In promoting Tempest (which I’m insanely proud of) I had this nagging feeling that there was a side of me that I didn’t have the opportunity to show people. Gymnastics, more as a coach than as a gymnast, was the first non-human thing that I poured my heart and soul into. I lived it and breathed it like I do writing and books now and it’s hard to let that part of me go.

I knew that I wanted to write a fictional story about an elite gymnast, but I needed something bigger than the sport. Something that grounded this girl to reality and then I thought about how big a role parents play in an elite gymnast’s life – money, time, organization, and also sacrificing their time with their child to allow them to spend nearly 40 hours a week with a coach. And then I asked that all-important question that many authors will use to ignite a novel: what if I took her support system away? And being the YA sci-fi/action writer that I am, killing people off is something I don’t bat an eyelash at.

So in January 2012, this story was born. I wrote 30 pages and then it was time to go back to reality and work on editing and preparing Vortex and then moving on to Tempest #3. The problem with me pursuing completing and possibly selling this novel is that it didn’t fit the brand that I’d created with Tempest. So, I felt guilty for working on it when I knew I needed to focus on more Julie Cross type projects. But I couldn’t stop thinking about this book and the characters. They literally stayed in my head for months and months growing like a an infected limb. I used to think that if I didn’t scramble to write a story it would fizzle out eventually, but boy was I wrong. It just grew stronger and stronger.

I read some of those 30 pages out loud to a middle school writing camp that I taught last year in June and when I told them I didn’t have a title, as a group, they came up with Letters To Nowhere. I figured it would change later, if I ever had the chance to finish the book. I figured I’d need something that hinted at the gymnastics aspect, but eventually I came to the conclusion with both the title and cover that when it comes down to it, it isn’t a story about gymnastics anymore than The Fault In Our Stars is a story about cancer. It’s not. Its a story about two kids who fall in love and happen to have cancer. Letters To Nowhere is about so much more than gymnastics.

Watching the Olympics at the end of July last year caused the characters and the story to start shouting at me instead of just talking quietly in the back of my head. When I finally sat down to write the rest of Letters To Nowhere last August, I had a complete novel in 14 days. No lie. It had fully formed in all those months of not being able to put it down on the page.

But I honestly wrote it to exorcise the story from my head so I could focus on finishing the Tempest series and the project I’ve been working on with Tempest cover model, Mark Perini (look up and hit the tab labeled Mark and Julie gchat for info on that project).

THE ROAD TO PUBLICATION

I’ll admit up front that I have a lot of projects brewing at the moment and some announcements will be coming shortly regarding future books, but I can’t mention these today unfortunately. But in submitting and selling these new projects, it was hard to find a place for Letters To Nowhere to fit. It’s not completely a YA but it also doesn’t fit the traditional definition of New Adult because my main character is 17 not 18 but she is on her own and facing big decisions about her future. She lives in an adult world in a lot of ways, but in a young girls world in other ways. It doesn’t fit exactly with my new projects and it doesn’t fit in with the Tempest series.

My husband was the one who convinced me recently to pursue self publishing Letters To Nowhere. My biggest fear was having people assume that I chose to self publish because I couldn’t sell it due to the book not lining up with my Tempest author brand. But in truth, I haven’t even pursued traditional publication of this book at all.  It’s never been submitted to editors at any publishing house. Last October, I did a call for beta readers on twitter and had 10 responses and the feedback was almost all positive. I kept getting emails from those readers asking me when the book would be published. And I felt guilty for presenting a project to them that I wasn’t sure what do with yet.

Of course I’m hoping for great sales, but mostly, I just want a chance for people to see this side of me. I want to provide this coming-of-age love story set in the world of elite gymnastics for all the kids that I’ve coached during my 15 year coaching career, for the people who want to read about a girl with a huge dream and a unique talent who falls for a boy that sees her flaws, what makes her special and her pain.

And I just want to state this right here right now…self publishing is hard work! I totally wouldn’t be doing this if my husband hadn’t agreed to take on all the non-writing/non-editing tasks. So for anyone who thinks you just upload your word document to Amazon…um yeah, that’s a myth or any urban legend or something.

I’ve done some revisions on the book recently and sent it off to an amazing copy editor so that it can be shiny and pretty once its on sale. The plan is to release August 1st however, upcoming projects (the ones I can’t talk about yet) may influence a delay in release. If I’m able to gain a lot of buzz and interest about the book in advance then releasing August 1, 2013 shouldn’t be a problem at all. Maybe even earlier…

Without further ado, I bring you my newest project…. 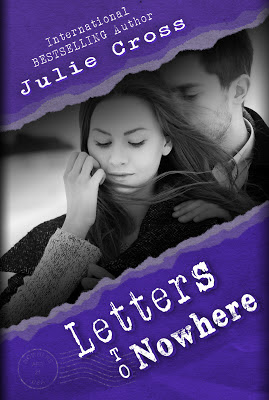 LETTERS TO NOWHERE
Seventeen year old Karen Campbell has just lost both her parents in a tragic car accident. Grief stricken and alone, her gymnastics coach opens his home to Karen, providing her a place to live while she continues to train, working toward a spot on the world championship team.

Coach Bentley’s only child, seventeen year old Jordan is good-looking and charming enough to scare away a girl like Karen—someone who has spent ten times more hours on balance beams and uneven bars than talking or even thinking about boys. But the two teens share a special connection almost immediately. It turns out Jordan has a tragic past of his own, grief buried for years.

As Karen’s gymnastics career soars, her nightmares and visions of the horrible accident grow in strength. She can only avoid facing her grief for so long before it begins to surface and ultimately spin out of control in a very dangerous way. Can discovering love and lust (simultaneously) help with the grieving process or will it only provide a temporary distraction while waiting for reality to hit full force.

If this sounds intriguing to you at all, I would greatly appreciate if you’d add it to your goodreads list (if you use goodreads). Letters To Nowhere will be a digital-first release, available in August at pretty much anywhere you can purchase e-books. The price will be under $4.99 most likely (probably $2.99 or $3.99). Unfortunately, the pre-order thing is complicated with self publishing so goodreads is my main source at the moment for gaining any pre-release buzz.

For those of you book bloggers and reviewers out there, if Letters To Nowhere sounds like your kind of book and you’d like to read it early (for free) and review it or do something online to help create buzz (I’m so open to hearing ideas!) please email me juliecrossauthor (at) gmail (dot) com

I’m not usually a beg-for-comments kind of author/blogger but today, it would be super awesome to hear from some of you, if only to tell me that I’m not insane and this book quite possibly might be something you’d enjoy. Or whatever else you might want to say/ask. Is anyone else a lover of sports themed YA like I am? What are your favorites?

Julie Cross
Author of the Tempest Series AND Letters To Nowhere…