So, this weekend I decide to face my biggest writing challenge yet. After reading a few incredible short stories on a site called Figment, I started to get super intimidated (even more than usual) and in the case of one particular 480 word story, I began to feel like a crappy writer. I’ve never been able to write a short story. I tell everything in novel form. It takes me an entire book to develop a character and to make a reader grow attached to them. It occurred to me that my strength might be in the fact that I don’t focus on words, I focus on the people in the story and where they go.

BUT, if I could somehow get myself to practice focusing on the words, on zooming in on a tiny speck of a moment in a character’s life and forcing myself to tell the story in less than 2000 words maybe it would really help me to grow as a writer. So, I just did it. Like literally just finished and I want to post it here before I chicken out and start to hate it. It doesn’t matter if I hate it because then I’ll know why I hate it and can try again. And again.

Anyway, if you’re willing to take a look and let me know what you think that would be greatly appreciated. I’d also love title suggestions. Unless it sucks then I don’t have to call it anything.

In fact, I’m going to do a signed TEMPEST + VORTEX giveaway entry for anyone who comments on the story (and seriously, be critical, it doesn’t matter if it’s good or bad feedback). And if you want to be entered, make sure to leave your email in the comments. 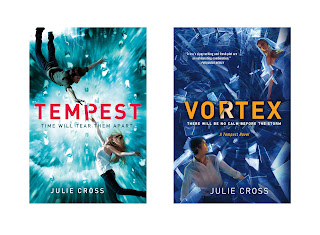 I could count on one hand the number of times my head has been fully submerged. The water ripples, forming peaks and then flattening them again. The current’s strong. It will be quick.

The branches and sharp jagged rocks on the bottom of the river fade in and out of view as the water pushes over them. The distance between my eyes and the deadly river is much greater than I had anticipated before making my way out to the ledge. My hands are wrapped so tightly around the metal frame of the bridge they’ve started to ache with an intensity that’s almost unbearable. The cold air is making the skin on my knuckles raw, probably bloody if I could see them, but that would mean letting go and turning around. I’m not turning around.

My heart is pounding and pumping blood so fast through my body that the only places I can feel the thirty degree wind are my fingers and toes. The rest of me could stand here forever. I look up at the dark sky, stars splattered across it like the lights I once saw on a Holiday tree. The one time Larry took me into town. That was eight years ago. I’d heard the engine of his truck roar to life so many times, but always from a distance.

That day in December, I had felt the truck rumble underneath me as I Iay flat against the ice cold metal bed, holding my breath and not moving a muscle. I had planned on squeezing my eyes shut, making myself believe I’d become invisible but as the dark cloudy sky zipped past me revealing a world outside of my shack in the woods, I couldn’t look away.

My entire body shook with fear when my stepfather had exited the truck after parking near the stores on the main street, but curiosity won, at least for a split second. After Larry tucked himself inside a shop across the street, I sat up just enough to peer over the side of the truck.

And there it was.

Sparkling in the window display, the pine tree sat front and center, wrapped in golden lights, silver bells dangled from the ends of nearly every branch and at the top, a child-like angel stood watch. Her dress was white, her wings spread open, and her face the picture of innocence. If heaven existed it resided inside that window. I imagined the warmth in the store and felt the welcoming heat so deeply it began to creep up my arms.

My eyes pulled away from the window after hearing sounds of unfamiliar voices walking past the door of the store. I focused on the higher pitched grown woman’s voice. A tall man walked beside her and I only allowed myself to take him in for half a second. His hair was too much like Larry’s. Between them stood a tiny person with a pink coat and white gloves covering her hands. A girl. Like me but smaller. They each held one of her hands. The woman had looked down at her and smiled, speaking words I didn’t understand but I’d felt their warmth. I’d never known, until that night, that words could be warm. Heated, yes, but not warm.

At that point, I’d lost track of the seconds Larry had been inside the shop so I returned to playing rock on the bed of the truck. As I stared up at the sky, snow began to fall like fluffy crystals, tiny bits of sugar, egg whites.

That was the first time I’d wanted to die.

I’d even focused on making my organs stop, on ceasing to exist because the smell of the snow, the Holiday tree lights stable in my mind, the sound of the woman’s warm tone…I wanted all of that to be the last thing I felt before leaving this world.

I lift my eyes to the clear sky again. No clouds to produce snow tonight, but the half crescent moon provided a beauty just as great as the lit up tree and the heavenly angel.

But before I could complete my final task, the visions of Larry tossing a box of tools into the back of the truck and catching me lying on my back invades my version of heaven. My breathing turns rapid and irregular, coming out in short gasps like it had when he’d caught me. I squeeze my eyes shut failing at forcing away the image of him leaning over me, shoving his square spectacles back up to the bridge of his nose, the lenses magnifying the storm brewing in his eyes. He didn’t speak a word until we returned home.

“You think God gave you those legs to escape? Is that what you think?” he spat.

At eight years old, I had learned by then not to answer those types of questions. He’d already made his decision and I would only make it worse by speaking.

“Fine, Leah,” he had said in that eerie calm. “Jesus survived forty days and forty nights in the desert, surely you can survive a night outside in the winter.”

I can still feel the pain my body endured after a night huddled in the back of Larry’s truck, my knees pulled to my chest, my face pressed against them, wishing the cold away. My stomach had rumbled with hunger, my insides hollow and empty. And I had wanted to die all over again but this time to escape the pain instead of searching for heaven.

By the time Larry pulled me out of the truck six hours later, dragging me down to the basement, whipping my raw, frostbitten skin with his leather belt, quoting scriptures to force the demons out of me, I had decided that heaven didn’t exist. But Hell? That was certainly possible.

Rage builds up inside of me. If I’m evil, if I defy God’s will tonight, it’s because he made me this way.

My feet slide further out on the ledge causing my stomach to turn over. This is it. I’ve finally made it out and only the distance between this bridge and the wild river separate me from freedom. Fifty, maybe sixty feet. It’ll be quick. The water’s freezing, the bottom of the river unforgiving, and the current strong enough to sweep a large object away from here with uncanny speed.

I’m forced into thoughts of Larry holding my head under the water of this very river. It had been summer and the water was calmer but even Larry could barely keep his feet planted with the flowing current. My baptism, he had said. I couldn’t swim…I can’t swim. And he’d forced me to wear the long pants and shirt like always, not covering my skin was unnecessary evil. I fought against the confines of the clothing, their weight pulling me down to the bottom. It wasn’t until I had started to lose consciousness that Larry had pulled me by my hair to the surface.

I take a deep breath and focus on the moon again. He can’t hurt me anymore. We’re going our separate ways. I release one hand from the metal frame, my heart pounding harder, faster, all the way inside my ears.

I lift my right foot leaving only a hand and foot to keep me in place.

The sound of suffocated screams distracts me from the moon. My eyes flicker downward, taking in the mass squirming beside me on the ledge. I lean over and use my free hand to shove the square spectacles back up to the bridge of his nose. His eyes are magnified, but the storm is gone, replaced by panic. He bites down on the cloth and tape shoved in his mouth, his hands still fighting the rope binding.

I press my boot against his stomach and allow my eyes to meet his before saying, “Goodbye, Larry.”

Then I push hard enough to knock him over the edge.

His body falls in slow motion, log rolling through thin air before splashing into the freezing river. I regrasp the metal frame with my other hand and watch until he drifts out of site.

My fingers begin to lose their grip so I turn around and crawl beneath the metal frame, returning my feet to the safety of the abandoned bridge. The trail where I dragged Larry through the snow is still visible, leading all the way to the shack in the woods. I turn my back on it and walk in the opposite direction.